Excel is one of those interesting tools where the more you use it, the more nuances and idiosyncrasies you notice about the software. Most users of Excel might only touch 1% of the features available in Excel, but as you peel back the layers, you start to see the core of Excel and what the engineers were thinking when they built certain features. It is a strange feeling when you move from being just a user of Excel to understanding the logic of the program itself. Dare we say, it’s like knowing there’s another world out there like Dolores found in Westworld?

With our first blog post of 2017, I highlight the top 10 signs you might be using too much Excel:

When you’re debugging formulas in Excel, chances are you’re hitting F2 and ESC quite often to get in and out of the formula. The F2 key seems to come off the most on laptops rather than a desktop keyboard in my experience, so you’re left with a weird small tube as a key which you have to press very accurately with your finger until it gets fixed.

If your F2 key looks like this, chances are you’re using a lot of Excel.

Related to #1, when you’re pressing F2 and ESC all the time, you’ll inevitably hit the F1 key by accident which brings up the Help menu in Excel. When you’re busy cranking through a model, the worst thing that can happen is waiting for that stupid Excel help menu to load just so you can close the window again. If you’re ahead of the game, chances are you’ve tore the F1 key off purposely so that you never accidentally hit the F1 key again. When you’re working on a huge file with many sheets and formulas, it makes sense to turn off auto-calc so that your computer isn’t calculating everything in your workbook after every single formula edit. The problem becomes when you go back to a regular file and create some formulas but can’t figure out why downstream formulas aren’t changing. You might spend 5-10 minutes trying to debug your formula, only to figure out that you forgot to turn this setting back on in Excel.

When the formulas aren’t changing because auto-calc is turned off.

You think you can simply sort a list of data that you might have received from engineering or a database, but for some reason it’s not sorting alphabetically like it’s supposed to. It turns out that there are trailing and/or leading spaces in the data you are sorting on which means you have to clean up the data first by getting rid of all the empty spaces. Good thing TRIM() takes care of that pretty easily, but it’s still adding a bunch of steps to what’s supposed to be a simple data sort. 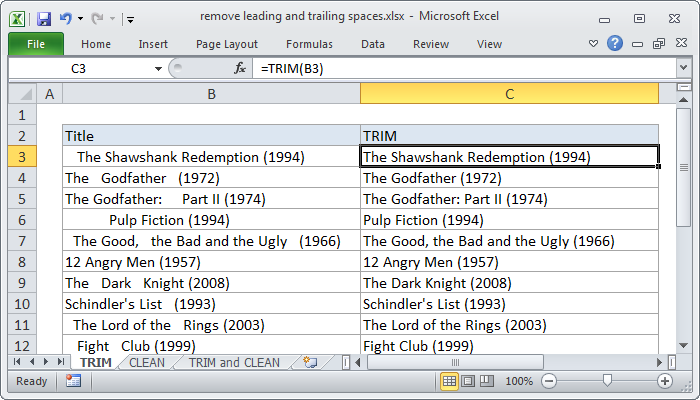 Don’t you hate it when there are all these extra spaces?

You spent an exorbitant amount of time making sure your graph is properly formatted with the proper axis titles, font sizes, etc. Then you start going back into the cells and add/delete rows or columns of data and wonder what happened to your graph. Chances are you put your graph close to the data you are playing with which means each deletion/addition of rows or columns completely messes up your graphs.

6) You Use Center Across Selection Instead of Merging Cells

Well done, Excel jedi. One of the first rules of Excel is to avoid merging cells because it can lead to complicated formula references, which is why when you try to center a piece of text across a bunch of cells, you use Center Across Selection instead of Merge Cells. I know, Merge Cells is so much easier and intuitive to use, and it just makes sense to “merge” things. If you’re an Excel power user, you already know Center Across Selection is the way to go.

Center Across Selection is your best friend.

7) You Flip A Coin on Updating Links or Breaking Links

You open the file, and the first thing you see is a warning from Excel saying the file you opened contains links to other data sources. Then you have to make a life or death decision of whether you should attempt to fish for the source file that contains the outside reference to maintain the link, or just go rogue and break the links all together. Depending on how patient I am or how important the analysis is, my decision to break or update the links is 50/50. My preference is to have all the source data you need in that file and not have outside sources specifically because of this stupid Edit Links error. To break or not to break? The big decisions you have to make right when you open the file.

So what if you’re not an artist? You already know Excel is not meant to be an artistic expression of nature, but rather an efficient display of numbers and data. Having said that, you instantly change the font colors of all your numbers and formulas to either green (reference to a cell on another sheet), blue (hard-coded data), or just leave it as the default black font color for formulas. Simplicity in the colors also means it’s easier for you to read and debug formulas. You also secretly judge other people use colors beyond these 3. You may even venture into using a yellow background color to highlight certain cells, but that’s pushing your artistic boundaries.

You discovered the dark arts of writing VBA macros. You’ve automated a task that usually took you 2 hours to do which now only takes 1 second with the super powerful macro you’ve just recorded by pressing play and stop like on a cassette player. You’re feeling pretty good about yourself because next month when the month-end report is due, you can use the same macro you built to save yourself time, until you find out the data has changed. Maybe a new column was inserted somewhere, or the data shifted by a few rows, and you’re stuck re-writing your macro. Then you start to wonder, is it worth changing my macro every month when it might be faster to do the work manually? Just send me consistent data damnit! Last but not least, we have to leave an Excel shortcut-related sign that you are using way too much Excel. You’ve got a pretty good system going on at work with your Thinkpad or Dell, and you’re feeling pretty productive up until you get home and open up your Macbook. All of a sudden, you feel like your aunt during Thanksgiving when she asks you how to send a text message on her smartphone. You try doing a Paste Special with ALT E, S and realize it doesn’t work and have to do it using the trackpad like a caveman. You might even go as far as downloading VirtualBox or VMWare on your Mac to using the Windows version of Excel, only to find out that the shortcuts don’t perfectly translate to the virtual environment either. And there you have it folks! 10 signs you’re an Excel power user. Take pride that thousands if not millions of data analysts around the world share these afflictions with you. If you have a sign that you use too much Excel, share in the comments!